I never met either of my grandfathers.  My WV grandfather died in 1926.  The one from New York died in 1969, but I don't think he had much interest in meeting me.  An older cousin tells me he was generally drunk and not very sociable when it came to children.  I also never met a single one of my great-grand parents--neither the Scandanavian immigrants, nor the Germans.  I am most certainly not old enough to remember Jersey City in the 1920s, York, PA, in the 1940s, or what year we had the Husdon (actually there were three Hudsons).

But, I will tell you this:

*I can hear my granddaddy Martin playing his fiddle, see his big size thirteens tapping in time to the music, catch the sparkle of his gold tooth as he tosses his head back and laughs.

*I smell the shrimp my NY grandpa brings home and steams in the middle of the night.  I see what's behind the false front of his boat--bottle after bottle of hooch, illegal in the days of Prohibition.  I hear the those bottles clink just a little as his boat rocks in the tide.

*I feel my great-grandmother's sorrow as immigration officials force her young husband onto a ship back to Sweden.  I feel her sorrow turn to excitement, to hope, to joy as she watches him jump ship and swim New York Harbor because of his love for her.

*And my handsome, pouty-lipped, run-around of a German great-grandpa?  Well, I know, he left his wife and children so poor they had to walk the railroad tracks gathering coal for the cook stove while he played the dandy all over Harrisburg.

I would not know any of these stories if my parents and grandparents did not have the good sense to tell them.  But since they did, I do.  I have a heritage, a geneaology filled with names and dates, but much more importantly, a history  filled with real flesh-and-blood people who carried deep sadnesses and dreams, who loved and sorrowed, who laughed, who killed themselves slowly.  And I am so grateful. 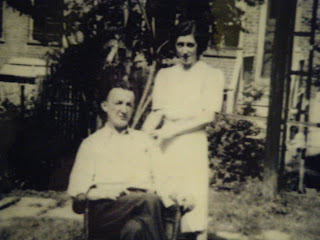 I think the best thing we can give our children besides siblings (if we are able), is the history of their own blood, their own bones.  Family stories die every day for lack of telling.  And usually, that lack of telling is for lack of asking.  Parents, grandparents, this is a call to you:  Tell your children their stories.  Learn them yourselves.  And children, ask.  Insist that someone tells you about the people who ran around in your family fifty or a hundred years ago, or more.  We all deserve to be talked about--one way or another.
Posted by Momma Paige at 10:11 PM

Momma Paige
I am a married mother of six and a grandmother of three. Every significant thing I have ever done is wrapped up, in one way or another, in the goings on of my family. I am a Christian, a special educator licensed in the state of New Jersey, a writer, a professional storyteller and a fledgling novelist. I have been a vegan, a dug-out coach, a raw foodist, a LeLeche League mom, a kombucha grower, a kefir culturer (both water and milk!), a marriage mentor (with my hubby) and a princess. I far prefer kids' sports over professional ones, and I have never met my grandfathers.